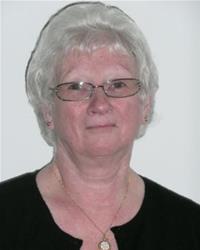 Other councillors representing this Ward:

More information about this councillor

Appointments to outside bodies

I was born in Barrow-in-Furness and moved to Dalton when I got married in 1973. I have one Son and two beautiful Grandchildren.  I am now retired after working for the NHS from 1994 to 2006. I am now a Trustee/Treasurer of the Dalton-in-Furness Old Peoples' Welfare Centre and very proud that the building is now in use six days a week. I have been a Dalton Town Councillor since 2000 and had the honour of being Mayor in 2002/2003 and again in 2015/2016. My interest in Council started when I became Dalton Town Clerk in 1988, holding the post until 1995. I had the honour of being the Mayor of Barrow in 2012/2013 and it was a marvellous year and very enjoyable. I met many people both local and County wide, as well as several members of the Royal family. A year that I will never forget. One of my hobbies was tap dancing, something I really enjoyed up until recently when I was advised not to do weight bearing exercises. I now have an exercise bike at home and pedal away whilst watching morning television and I really enjoy it, both the pedalling and the television, and it's keeping me fit.  I have been a darts player since the 1990's and until recently was the League Secretary for Dalton and District Ladies Darts League, unfortunately the League has now ended due to lack of teams. I have now started playing on a Wednesday for a Dalton team in the Barrow League. I am not an ace player, if I win it is a bonus.

To view details of interests declared at meetings prior to January 2019 please click here.

To view attendance records from meetings prior to January 2019 please click here.